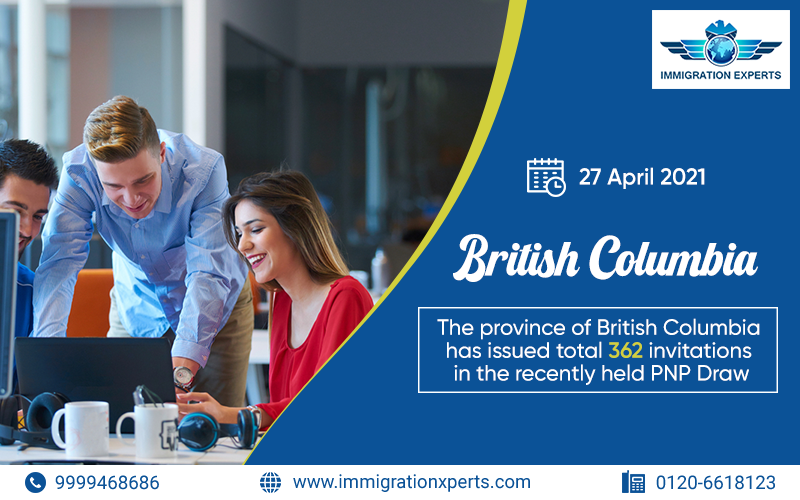 So far in the year 2021, British Columbia has issued 3,893 nomination letters or invitation to apply through its provincial nominee program

British Columbia PNP invites a total 362 eligible and skilled applicants through their two Provincial Nominee Program (PNP) draws that were announced on April 27, 2021.

This recent invitation round has again confirmed that the provincial government of British Columbia has conducted a general draw and the second draw targeted restaurant and food service managers and wholesale trade managers.

Applicants from the Express Entry BC (EEBC) and Skilled Immigration (SI) immigration streams of the provincial nominee program of British Columbia, which is more prominently known as British Columbia Provincial Nominee Program (BC PNP) has received invitation to apply in the general draw.

Precisely, for this draw, invitations were issued to all those candidates that were selected through the Skilled Worker, International Graduate and the Entry level and Semi-Skilled sub-categories of the two main stream of BC PNP, that are, Skilled Immigration (SI) and Express Entry BC (EEBC).

The minimum requirement of the score for this PNP draw ranges between 78 and 95 points in which 348 candidates received the invitation to apply.

However, a rather separate draw for all those applicants whose employment falls under the occupation category of NOC 0621 or NOC 0631 need to score 113 points and only 14 invitations were issued to applicants in these two specific occupations.

About the British Columbia PNP

The British Columbia PNP program aims to attract international workers who have experience in some of the prominent and high demand occupations across the province and also who wish to live and work in the province as permanent residents.

Applicants are assessed and issued a score on the basis of the factors that includes level of education, work experience, proficiency in the English language and also the location of their employment.

If an applicant gets approval on their application, then they can use their nomination to apply for the permanent residence through the Express Entry System which is directly operated by the Immigration, Refugees and Citizenship Canada (IRCC).

Express Entry candidates who receive a nomination from the provincial nominee program of British Columbia will be then awarded an additional 600 points towards their Comprehensive Ranking System (CRS) of the Express Entry profiles, thereby increasing their chances to get considered and receive an ITA in the subsequent federal express entry draw.

The British Columbia PNP is one of the provincial nominee programs of Canada. Through these programs, the provincial governments can nominate the new professionals who have the potential and eligibility to settle in the province and contribute towards their local economy.

British Columbia is known for attracting professionals with innovative ideas and tech expertise, and its controlled and mild climatic conditions and also proximity with the US are also one of the important factors in attracting businesses and workers in the province.

Express Entry is one of the main pathway through which Canada managed skilled and professional workers applications. There are considerable possibilities to skip the PNP immigration route and receive an Invitation to Apply (ITA) for the permanent residence of Canada directly by applying for the same, directly from the Express Entry. However, if an applicant receives a provincial nomination then it effectively provides a guarantee that the Federal Government of Canada or the Immigration, Refugees and Citizenship Canada (IRCC) will send you the required invitation to apply for the permanent residency of Canada.

Express Entry can be described as an application management system which operates and manages three Federal Immigration Stream. When a candidate submits their Expression of Interest, and then then are ranked on the basis of the Comprehensive Ranking System (CRS) which takes into consideration factors such as age, employment experience, education and also language proficiency skills.

The candidate who is able to score highest is able to receive an invitation to apply (ITA) to apply towards the permanent residence, where the selection of the eligible candidates takes place through the frequently held Express Entry Draws.

You also receive an additional 600 CRS points after being nominated by a province, such as British Columbia. This additional award of points is high enough to enable you to receive an Invitation to Apply (ITA) in the subsequent Express Entry Draw.

Provincial Nominee Program draws have continued consistently through the pandemic situation and there seems to be more number of PNP selection draws that will be taking place in the year 2021.

We request you to fill up our Free Evaluation Form and take the initial step towards your Visa and Immigration Process.

We are available for ONLINE CONSULTATION!

Contact Immigration Experts for FREE Points-Based Assessment of your profile:

Drop us an email at: info@immigrationxperts.com

Book your appointment with our experienced immigration counselors and solve all your immigration related queries at the comfort of your home.

We are available on Skype (Immigrationxperts.com), Google Duo and Zoom calls.

How to immigrate to Canada as a Nurse »  :Next Post

About Immigration Experts
Immigration experts, we believe in providing high quality client-servicing in those areas that are not aided by government or any governmental bodies. We believe in providing hi-quality client satisfaction and excel in every arena of immigration related services, including looking after the rights of the recent dwellers are entirely protected and represented whenever needed.
Noida
ITHUM Towers, Office No. 403, 4th Floor, Next to Nucleus Software (Near Highway Towers, Next to Corenthum), Sector 62 – Noida, India.