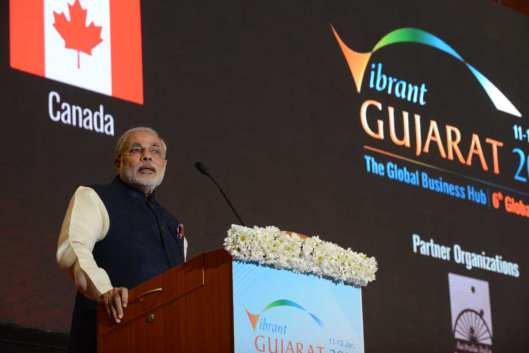 Canada proud to be partner country for Vibrant Gujarat.

"The Government of Canada is proud to participate in the 7th Vibrant Gujarat Summit,” said Chris Alexander, Canada's Citizenship and Immigration Minister and head of the Canadian delegation. “This summit allows us to further strengthen ties between Canada and India by highlighting business opportunities, sharing experiences and trading ideas.”

Canada has dramatically increased its focus on India in recent years building on shared values of democracy and pluralism by steadily increasing trade and investment ties. There are over 300 Canadian companies with a physical presence in India and more than 1 million Canadians claiming Indian descent. Canada now has nine offices in India including the High Commission in New Delhi, Consulates General in Mumbai, Bengaluru and Chandigarh, Consulate in Kolkata and Trade offices in Ahmedabad, Chennai, Kolkata and Hyderabad. Alexander will also have the opportunity to highlight developments in Canada's economic immigration policy, such as the newly launched Express Entry system and the Start-up Visa program. Following the Vibrant Gujarat, Alexander will travel to Bengaluru,  formerly known as Bangalore, to celebrate the opening of a new visa office.